HOW THE INTERNET KILLED ONE OF YOUR FAVORITE CRUTCH PHRASES

This post is in memory of a phrase you and I have said or thought many times before. This phrase has existed since the beginning of humanity. But recently it has been dying a slow and painful death. And today, the Internet has finally killed the phrase. 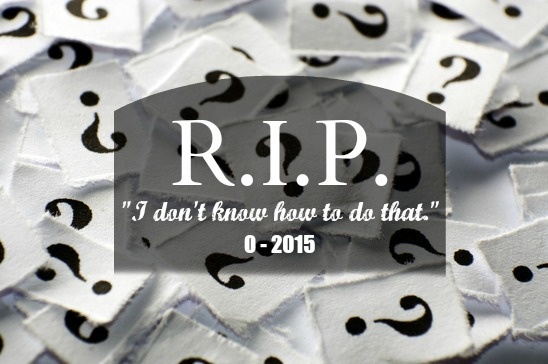 The phrase had a quiet and poorly attended funeral because many people still stubbornly refuse to believe the phrase is dead. They still want to use the phrase as their crutch, as an excuse, a scapegoat for ignorance.

The phrase that’s been slain is “I don’t know how to do that.”

I was recently reminded when this phrase was relevant while watching the new Disney movie, McFarland USA. It’s the inspiring true story about the 1987 Mexican-American cross country team from McFarland, CA (spoiler alert) who won a state championship.

In the movie, the ex-football coach, Jim White, receives approval to create the school’s first cross country team despite White not knowing how to coach the sport. White had never run cross country, never coached it, and didn't know any other cross country coaches. He had zero knowledge and experience.

In order to better understand the sport of cross country, White conducted research via perusing libraries, calling other schools, digging into paper-stuffed archives, reading physical books, watching VHS tapes, and he learned from the failure of his actions. The learning curve for coach White was extremely steep and time-consuming in 1987.

Contrast that with today and White could have Googled the latest cross country records and regulations, searched YouTube for the techniques to coach and drills to run, and used social media to help recruit talent. White’s learning would have taken a fraction of the time it did in 1987.

The Internet has assassinated the phrase “I don’t know how to do that.” The Internet offers endless resources and tools to learn just about anything. Success and development is now about will and focus.

The next generation of great leaders, employees, and entrepreneurs will be those committed to adaptive learning. Their greatest asset will be their willingness to continuously learn in order to upgrade their talents and hone new skills.

Related Read: 5 Reasons Now Is The Best Time To Become An Entrepreneur

Now that the excuse of “I don’t know how to do that” is forever off the table, people’s stubbornness and laziness will be exposed faster than ever before. Don’t be that person.

Adaptive learning in today’s perpetual beta work culture is invaluable.
Rest in peace “I don’t know how to do that.”

Question: What is one thing you’ve always wanted to learn?