EXPONENTIAL CHANGE IS COMING, WILL YOU BE RULER OF YOUR NEW REALITY?

Once upon a time, there was a mathematician and inventor named Sissa who created chess. One day Sissa showed his inventive game to the ruler at the time and he was so impressed that he decided to reward Sissa with anything he wanted. Instead of land or a palace, Sissa asked for a single grain of rice on the first square of the chess board, and then to double the amount of rice for every subsequent square until the 64th and final square. The ruler was puzzled by the request but ultimately agreed. 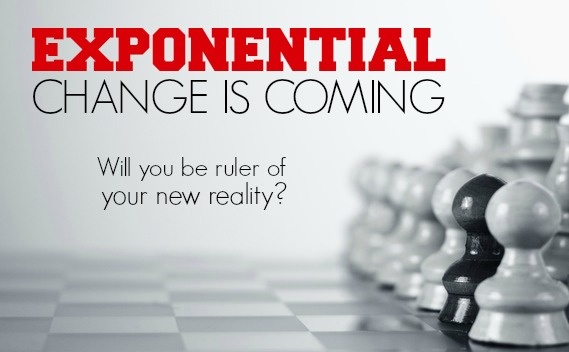 Shortly after agreeing to the reward, the ruler was shocked to learn that if you were to start with a single grain of rice, then put two grains on the second square, four grains on the next square, and so on until the 64th and final square you would end up with a mountain of rice that would tower over Mount Everest. The amount was 1,000x the present day global production of rice.

In the past, all of the world’s innovations were designed to impact our physical world. Many of these innovations caused linear (non-exponential) and gradual change. But today’s innovations—computers and the Internet—are impacting the physical and digital worlds. Connectivity and the cloud have enabled exponential and accelerated change.

91% of the people on earth have a mobile phone and 50% of mobile phone users use their devices as their primary Internet source. Because the world is now hyper-connected, the speed of change has exponential power. No industry or individual is immune. In fact, many believe that we are outpacing Moore’s Law, which states that technological processing power doubles every 18 months.

Consider these powerful examples of the exponential times we live in...

Whether you think all this change is scary or exciting, there is no arguing that things that once seemed impossible are now possible because of the scale of technology and exponential change. Our future selves will yawn at how slow paced 2014 was.

As the story goes, Sissa amassed so much wealth with his rice that he became the new ruler of the land.

I hope you adopt an exponential mindset and continue to innovate so that you can become the ruler of your reality.

Question: What frighten or excites you about the future?