"We now live in the Shift Age, a time of transformation that will be regarded by future historians as one of the most significant periods in human history."
~David Houle, Entering the Shift Age: The End of the Information Age and the New Era of Transformation 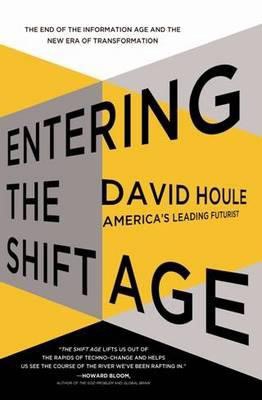 America's Leading Futurist, David Houle, coined the term: The Shift Age. It started in 2006 and is described a time when almost everything is in some rate of shift. The Shift Age will be looked back upon as having ushered in the greatest amount of change up to this point in human history. The Shift Age is defined by networks, flat management structures, and a high degree of collaboration. And the book is about macro trends, the largest forces reorganizing our world today.
Overall I give the book a 4.2 out of 5!
I enjoyed this read. It stretched my thinking and exposed me to new trends. The digital version of the book includes video which was informative but all the videos are black and white and mega boring and non-dynamic. That was my main slam for this read.
I am going to scatter many of my learnings from this book over the next few posts but I thought I'd start with what I found most fascinating.
The Movement Between The Ages
Agricultural Age: Lasting 10,000 years, it was an age that was defined by tools. It was the first time humans stopped following the animals and weather. Towns and cities superseded migrant tribes. People spent entire lives living in a single place for the first time in humankind's time on Earth. Wealth came from the land.
Industrial Age: Lasted from 1700 to 1975 and was defined by machines. It was a time where people left the land for the rapidly growing cities which spurred the creation of communication inventions. Factories created a centralized workforce. The concepts of jobs and management began. Wealth came from those who controlled production.
Information Age: Lasted from 1975 to 2005 and was defined by technology. High technology started to replace machines. Computers dramatically increased everything in science, business, and education. The fax machine, electronic calculator, and the copier changed the office.
Shift Age: Started in 2006 and will be defined by consciousness. The 3 largest forces reorganizing the Shift Age:
It's truly amazing how rapidly the ages are changing and will continue to forever shift.
Favorite Book Quote: "Change is no longer one of several dynamics that we must manage; it is the environment in which we live."
Question: What areas of life do you envision the Shift Age transforming?
Get more David Houle: Twitter / Facebook / Website