How to Raise the EQ of Your Digital Messages

We aren’t communicating as well as we think. 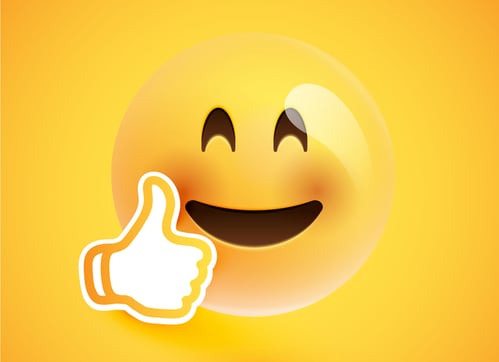 For example, according to Morgan, recipients of a two-word email or text such as "nice job" or "great work” interpret the message as sarcastic 60 percent of the time.

Why do people misinterpret so frequently?

Humans have a tendency to assume the worst when the intent of communication isn’t clear. The negative bias that once alerted the brain of cavemen and cavewomen of potential dangers, like bears or alligators, is still very active in the minds of today’s modern workers.

How do we overcome negative biases hijacking the intended meanings of our communications and ensure our messages aren’t misunderstood 50 percent of the time?

4 Reasons to Use More Emojis at Work

An early indicator of how culturally-ingrained emojis had become was in 2015 when the Oxford Dictionaries' “Word of the Year” wasn’t a word but actually the emoji, 😂.

Sixty-one percent of emoji users use emojis at work. Twenty-six million custom emojis have been created in Slack since the “Add Custom Emoji” feature was introduced and “emoji use is basically universal” for the 13 million daily active users of Microsoft's unified communication and collaboration platform, Teams.

For example, an “Ok” text from someone can be interpreted as acceptance, apathy, submissive, passive aggressive, or others. But an "Ok 😃” text is easily interpreted as positive acceptance. Adding an emoji removes the emotional ambiguity. Emojis can also create more efficiency by quickly conveying the intent and context that would otherwise be missing in a message.

Unsure what emoji to use for a certain emotion? Use Emojipedia to search emojis by emotions or other categories.

The proper use of emojis help people form relationships and understand one another, according to a recent review of 50 studies on the use and impacts of emojis in communication.

More specifically, when emojis are used at work, the majority of emoji users feel they positively impact likability (78 percent) and credibility (63 percent), and make positive news more sincere (74 percent). And 81 percent of emoji users believe that people who use emojis are friendlier and more approachable.

In addition, 94 percent of emoji users said the “ability to communicate across language barriers” was the greatest benefit of using emojis.

4. Emojis can close the generational gap.

Read this to learn more.