4 Reasons Generation Z Will be the Most Different Generation

“Look at you with your fancy-schmancy high-speed Internet. You know in my day, you couldn’t just start streaming six ways to Sunday…you’d get knocked off. And sometimes it took a minute to download a song. That’s 60 seconds for crying out-loud! Sitting and waiting for an album to download…I still have back problems.” 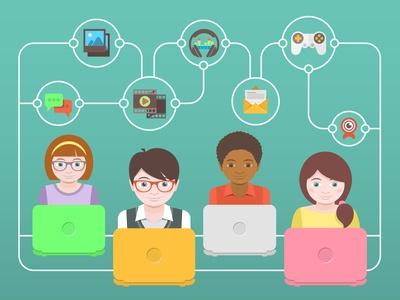 A 14-year-old actually spoke those words to a group of younger kids in the comical AT&T “In My Day” ads from a few years ago. The ad campaign humorously illustrated that technology was moving so fast that even 14-year-olds weren't able to keep up with their younger peers.

The ads were extremely funny, yet painfully truthful. How can the rest of us expect to keep up with the fast times when 14-year-olds already feel out of touch?

Gaining a better understanding of how Generation Z is changing and will be different from previous generations will help to alleviate the sense of being out of touch and will future-proof your leadership, communication, marketing, etc. as you prepare for the emerging generations to enter your market or workplace.

4 Reasons Generation Z Will be the Most Different Generation

1. Generation Z will be smaller.

To put it simply, generations are formed by significant events or societal advancements during the moldable years of an age cohort. The behaviors and values of the Silent Generation were shaped by World War II, Baby Boomers shaped by the Kennedy Assassination, Generation X shaped by the Challenger explosion, Millennials shaped by 9/11, and Generation Z is being shaped by mobile technology, terrorism, and social media to name a few.

Generations have typically spanned 15-20 years but because of the rapid advancements in technology and ubiquitous connectivity, mobile devices, and social networks provide a 24/7 feed of real-time information in the palm of our hand. This shift has enabled the emerging generations to be exposed to more life-shaping content and thus shrinking the generational span from 15-20 years to 5-10 years.

As technology and connectivity rapidly evolves, so will the emerging generations.

2. Generation Z will be more diverse.

In the past, all of the world’s innovations were designed to impact our physical world. Many of these innovations (ex: wheel, printing press, steam engine, car, etc.) caused linear—non-exponential—and gradual change. But today’s innovations—the Internet, Facebook, Uber, Amazon, Pokémon Go, Netflix—are impacting the physical and digital worlds. Connectivity and the cloud have enabled exponential and accelerated change.

Generation Z is becoming more behaviorally and culturally diverse thanks to today’s exponential times. Today there are countless platforms and channels where Generation Z can connect, consume, and contribute. News, trends, and products and services all have the exponential power to reach and reshape generations. For example, Generation Z won’t remember a day when you couldn't tap a screen and in one hour a drone dropped off your Amazon package at your front door. That fundamentally changes how Generation Z expects products and services to be delivered to them.

Exponential times enabled Pokémon Go, the location-based augmented reality mobile game, to become the most downloaded mobile game in its first month (130 million downloads) and the fastest mobile game to earn $600 million in revenue (90 days). Because of the games success, Generation Z will expect to use more augmented and virtual reality experiences moving forward.

Generation Z will be more diverse in their thinking, behaviors, and culturally. If the Millennials have you scratching your head, prepare yourself for a full mind blow as Generation Z brings even more diversity and change.

3. Generation Z will be more global.

The Millennial generation is the most global to date and have more in common with their international peers than any previous generation.

Millennials were considered the first global generation but as more of the world comes online, geographies will continue to shrink. Generation Z will become more global in their thinking, interactions, and relate-ability. In fact, 58% of adults worldwide ages 35+ agree that “kids today have more in common with their global peers than they do with adults in their own country.” An 8-year-old in the U.S. is likely to have more in common with an 8-year-old in India than a 65 year in their own country.

Generation Z has been able to turn on Xbox One, put on a headset and communicate with peers halfway around the world in real-time while they game. Connectivity has reframed for Generation Z how effortless it is to communicate and collaborate across the globe.

Generation Z will be a boundary-less generation.

4. Generation Z will influence your behavior.

Like no other generation before them, Millennials and Generation Z have actively tried to assimilate previous generations into their culture. As an adult, have you texted an emoji to a co-worker, taken a selfie or downloaded Snapchat? Many actions that were once considered “childish” are now mainstays in culture. Never before have behaviors been rippling up generations like they are today.

Here are a few additional examples.

Previous generations are assimilating the behaviors of the emerging generations for two primary reasons: transparency and self-preservation.

Humanity has always looked to its youth for innovation, but today it’s happening faster and more frequent than ever before.