One of the most prominent strikes against the Millennial generation is their "poor work ethic." I'd like to challenge the assumption that Millennials lack work ethic. Because how can we compare a new generation of workers with previous generations when work has changed so significantly? 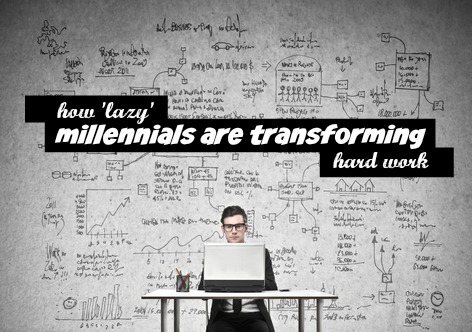 According to Shane Snow's book, Smartcuts: How Hackers, Innovators, and Icons Accelerate Success, "It took the oil tycoon John D. Rockefeller 46 years to make a billion dollars. ... The 1980s computer baron Michael Dell achieved billionaire status in 14 years; Bill Gates in 12. In the 1990s, Jerry Yang and David Filo of Yahoo each earned ten figures in just four years. ... Pierre Omidyar, founder of eBay, three years to [make a billion dollars]. And in the late 2000s, Groupon's Andrew Mason did it in two [years]."

It's clear that success has accelerated and work has changed drastically since the 19th century when Rockefeller built his oil empire. More recently the creator of Snapchat, Evan Speigel, turned down $3 billion dollars in 2013, less than two years since launching. He was 23 years old.

A recent GE commercial humorously highlighted the new era of work that is being ushered in by a new generation. In the ad, a Millennial parent tries to pass down an old manufacturing hammer to their recently hired son only to find out he will be writing the code for the manufacturing machines to share information with each other instead of swinging a hammer. Befuddled and convinced that their son lacks work ethic, the father shames the Millennial by asking, "You can't pick it [the hammer] up, can you?" The Millennial responds, "I don't need it."

Work has changed. Thanks to technology and the internet, the tools, rules, and pace of work have forever changed.

Today's entrepreneurs, like Simple Green Smoothies, are launching successful businesses only needing a single Instagram account. Building a business still takes intense dedication and relentless hustle, but there has never been more opportunity to work smarter--doing more with less--than in today's hyper-connected world.

Too many people have a dated view of work and equate working smart to being lazy. This Carvana ad amusingly epitomizes how Millennials are leveraging technology to work and live smarter. The Millennial in the ad describes lazy as the "mother of invention" and states, "Where there is a will, there is always a way to make it easier. What you call lazy, I call brilliant."

Amber Fehrenbacher, chief marketing officer of SuretyBonds, says it this way: "With answers to any possible question in the palm of their hand, in most situations, Millennials tend to take the fastest route. That's not laziness. That's problem-solving."

Mobile and collaborative technologies have enabled work to be streamlined, automated, and outsourced. If more can get done in less time today, then why are we still defining work ethic by time input and tenure? Today's work ethic should be defined by outputs and problem-solving ability.

A very different "work ethic" is needed for swinging a hammer than is needed for machine coding. After all, it's entirely likely that the GE Millennial will create more output writing code for countless machines in one hour than his "grand pappy" would have swinging a single hammer for an entire week. No disrespect--that's just the new reality of work.

"[Millennials] can code and develop apps and algorithms that will change the world. It is time to get over their shortcomings, and get down to 21st-century business," says the CEO of Peak Sales Recruiting, Eliot Burdett.

Accomplishing more work in less time, then leveraging that additional time to solve complex problems, spend time with family, or pursue a side venture is the new calling card of a 21st-century hard worker.

The "poor work ethic" label should now be reserved for those who refuse to retool and relearn for the 21st century of work.

Question: How do you define a strong work ethic?