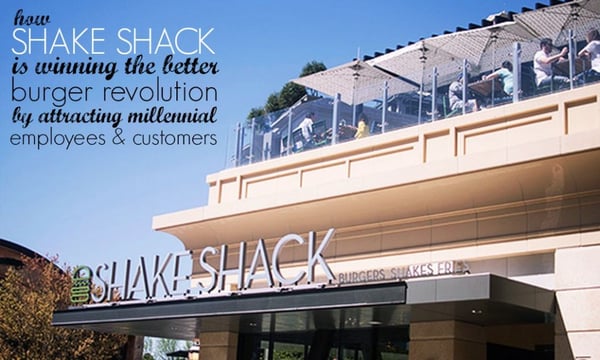 Shake Shack restaurants boast slick graphic designs and color schemes (instead of the typical fast-food cartoony colors), a modern and thoughtfully designed room layout, and each restaurant is localized to some degree (the Boston, MA store has reclaimed-wood walls that were made out of materials from an old Boys & Girls Club in a nearby community).

In an effort to connect customers with surrounding communities and encourage customers to hang out, Shake Shack is experimenting with Ping-Pong tables, outdoor foosball tables, bocce courts, and Shack-sponsored music series with local musicians.

Millennials are savvy diners who care more and more about how their food tastes and where their food comes from. Shake Shack prides itself on sourcing high-quality natural ingredients and carefully sourced food. Their beef is humanely raised, antibiotic- and hormone-free, and ground fresh from full-muscle cuts. They make their beef fresh every night, then it goes to the restaurant the next day where they cook food to order.

Additionally, Shake Shack ensures their buns are free of genetically modified organisms and has removed corn syrup from it’s burger sauce and custard. All of this is put on display through Shake Shack's transparent kitchens that are front and center versus hidden in the back. Shake Shack has cultivated an expectation of excellence, transparency, and sustainability. All of which resonate with Millennial consumers.

Shake Shack serves local craft beer and has a signature house beer made by Brooklyn Brewery, the ShackMeister ale. 43% of Millennials say craft beer tastes better than domestic beer. 44% of Millennials have never drank a Budweiser. And Shake Shack’s “Burgers n’ Brews” beer pairing and dinner events fulfill a need since 45% of consumers say they would try more craft beers if they knew more about them.

The CEO of Shake Shack, Randy Garutti, was recently alerted that a couple of high schoolers tried to Snapchat-tag Shake Shake while hanging out in the one of their restaurants and found they weren’t on the social network. Garutti responded with, “That’s so lame. I’ll find out what’s up.” He quickly notified someone at Shack HQ to pursue further.

Shake Shack isn’t arguing with Snapchat’s 30 million monthly active users but instead is leaning into today’s new social platforms and meeting Millennials where they are.

Recently Garutti encouraged employees to, “Put us out of business.” What he meant by that was to be over-the-top generous to every person that walks through the doors of a Shake Shack. Give away free stuff, help, and serve the customer in any way possible. Ultimately empowering the employees to do whatever it takes to make a difference in the customer’s experience.

Shake Shack founder, Danny Meyer, said it this way in a recent Inc article, “You do need to provide [employees] with riverbanks, but you don’t have to tell them how to row the boat, within the river. It’s not up to me to take away their autonomy, which is what lets them be magical and to innovate along the way.” Millennials respond well to the magic that comes from letting them design their own way of carrying out their duties.

Similar to Southwest Airlines, Shake Shack has developed a culture that puts it’s employees first. It’s a philosophy they call “enlightened hospitality.” It’s a set of priorities where employees are first, next are customers, then the outside community, suppliers, and finally, investors. It’s easy for Millennials (or any other generation) to get behind a company culture like this.

The #1 reason Millennials leave organizations is due to the lack of career opportunities. Shack Shake is constantly looking for advancement and development opportunities for their employees. Many of Shake Shack’s executives have been groomed from within. Garutti said in a Fast Company article  “Our job is to promote [employees] and show them how they can make a lot more money if they choose to be a leader.” Many of Shake Shack’s hourly employees have been promoted to manager, general manager, and beyond.

Question: How are you attracting Millennial employees or customers?