15 ASPECTS THAT HIGHLIGHT HOW GENERATION Z IS DIFFERENT FROM MILLENNIALS

The verdict is still out on where the Millennial generation ends and Generation Z begins. Some studies start Generation Z as early as 1993 and others as late as 2000. But no matter how you slice it, there are clear differences in behavior and preferences between Generation Z and the Millennials. These differences are sure to prompt additional adjustment when in comes to leadership, recruiting, parenting, and marketing. 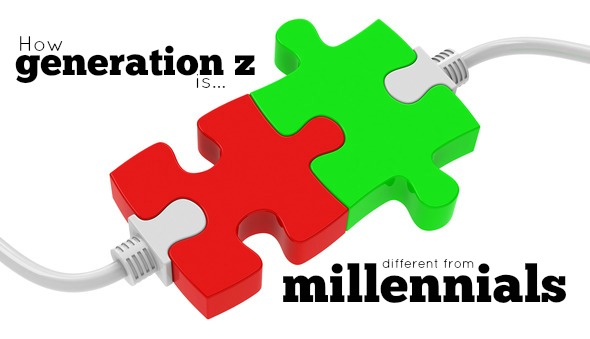 A question I am beginning to get a lot is “Who is Generation Z?” Recently, I did my best to answer that question here. And the other question I have gotten a lot recently is “What is the difference between Millennials and Generation Z?”

Those that ask the second question are really asking “How do I need to prepare my business, shift my marketing, adjust my leadership, and adapt my recruiting efforts to stay relevant tomorrow?”

In many ways, Generation Z is the extreme version and the opposite of Millennials. Some of these noticeable extremes and differences could help hiring managers, marketers, leaders, and parents better connect with the emerging generation and thrive tomorrow.

How Generation Z Differs from Millennials

1) More pragmatic. Today’s turbulent times have made Generation Z more realistic that opportunities are not boundless (like many Millennials believe) and that they need to continue to master new skills to stay reverent. Perhaps Generation Zers can thank their Generation X parents for this trait.

2) More cautious. Growing up amid a global recession, war, and terrorism; Generation Z is expected to take less risks and seek more stability and security than the freedom and flexibility that Millennials seek.

4) More face-to-face. 53% of Generation Z prefer in-person communications over instant messaging or email. Generation Z may overcompensate on interpersonal skills as they notice Millennials struggling (and getting razed) for a lack thereof. Surprisingly some researchers are predicting that because of how Generation Z uses and interacts with technology that they will be more skilled at face-to-face communication than Millennials...but that might not be saying much. Generation Z has used tech tools like Skype, Google+ Hangouts, FaceTime, and Snapchat to communicate with one another using full sight, sound, and motion.

6) More global. Millennials were considered the first global generation but as more of the world comes online, Generation Z will become more global in their thinking, interactions, and relateability. 58% of adults worldwide ages 35+ agree that “kids today have more in common with their global peers than they do with adults in their own country." Diversity will be an expectation of Generation Z.

7) Less educated. 64% of Generation Z (vs 71% of Millennials) are considering an advanced degree. Why make the major investment when there are more and more online alternatives available?

8) More individualistic. Generation Z are looking for individuality because they were born social (92% of children in the U.S. have a digital footprint) and everyone has done everything (at least that’s what many individual's social media accounts would have you believe). Seeking uniqueness in the brands they do business with, future employers, and their leaders is a priority.

9) More tech dependent. Millennials embraced technology but Generation Z will be the true digital natives since they ONLY know a world with touch-screens, social media, and apps. Generation Z has developed a much higher instinctual relationship with technology. Generation Zers were collaborating via Google Docs when Millennials were learning cursive.

10) Less parented. Most of Generation Z’s parents are Generation Xers who are likely to be less self-esteem focused than Baby Boomers were as Millennial parents. Gen X parents are aware of the negativity surrounding the "everyone gets a trophy” approach and will likely act more as a coach than as a friend to their Generation Z children. Gen Xers are also likely to overcompensate for their latchkey upbringings by being attentive and preparing Generation Z to make their own way.

11) More early-starts. Many employers are predicting that more students, starting at 16 years old, will go straight into apprenticeships or internships, and foregoing the traditional higher education route and instead opting in for online studies.

12) More disruptive. What else would you expect from a generation that lives in a world that treats gamers like athletes and YouTube celebrities are rebellion against traditional media? Generation Z is a new breed of hackers, activists, gamers, and entrepreneurs.

13) More split-tasking. In school Generation Z creates a document on their laptop, reopens it on their smartphone while on the bus, and revisits again at home while watching TV. They shift from work and play, real and virtual in short intense spurts. Imagine how they will redefine the workplace with this type of workflow.

14) Less focused. Today relevant is constantly being refined and Generation Z lives in a world of continuous updates. Generation Z digests information fast thanks to Snapchat and 6 second Vine videos. Thus their attention spans might be significantly lower than Millennials.

How Generation Z is Similar to Millennials

1) Short tenure. 83% of today’s students believe that 3 years or less is the appropriate amount of time to spend at their first job. Similarly, 91% of Millennials expect to stay in a job for less than 3 years.

2) Personal responsibility. Both generations are extremely interested in building their personal brand by gaining transferable skills that they can take to any job or leverage to become an entrepreneur.

3) Company skepticism. Millennials were wary of company loyalty after witnessing their parents being laid off from a company they were loyal to. Similarly, Generation Z will be skeptical having witnessed the 2008 financial crisis and the controversy over the US National Security Agency spying.

4) Development focused. The most important workplace factor for Generation Z is opportunity for advancement. The #1 reason Millennials leave organizations is due to lack of career opportunity.

5) Mentor seeking. Generation Z seeks mentorship systems that will help them forge strong skills. And 75% of Millennials want a mentor.

6) Difference makers. 60% of Generation Z want to have an impact on the world. And 84% of Millennials say making a difference in the world is more important than professional recognition.

Question: What other differences have you witnessed between Millennials and Generation Z?