3 UNEXPECTED LESSONS THE ALS ICE BUCKET CHALLENGE HAS TAUGHT US 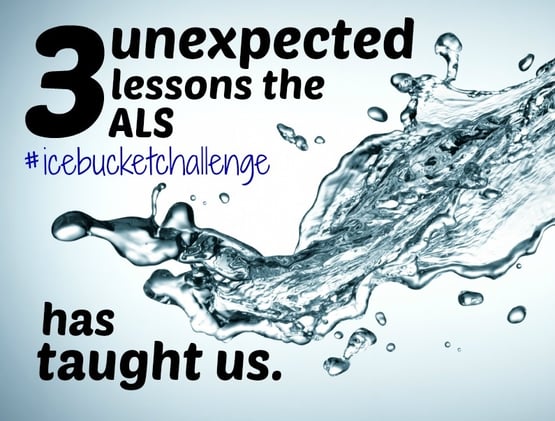 The challenge is simple: dump a bucket of ice water on yourself and film it, post to the Internet and tag yourself, and then tag and challenge others to do the same within 24 hours, or make a $100 donation to ALS. (This is one of my favorite challenges.) ALS is a neurodegenerative disorder commonly called Lou Gehrig's disease that affects 20,000-30,000 people in the U.S.

Related Read: 5 Questions That Try To Make Sense Of The Harlem Shake

3 Unexpected Lessons The ALS Ice Bucket Challenge Has Taught Us

1) Video communication is on the rise.
We are on the verge of an online video tipping point. According to Cisco, video traffic will be 79% of all global consumer Internet traffic in 2018. This means we will consume and communicate via video a whole heck of a lot more in the near future. The ALS ice bucket challenge has demonstrated people's acceptance and readiness to communicate more through video.

2) Video skills need work.
If we are going to be communicating more via video than we need to up our skills. Just like communicating face-to-face, over the phone, or via email takes practice to master so will communicating over video. While for an outstanding cause, most ice bucket challenge videos need help in the following areas:

Related Read: The 5 New Rules Of Face-To-Face Communication Every Millennial Needs To Embrace

3) Social media is the real deal.
Please don't tell me you still think social media is a fad. The success of the ALS ice bucket challenge was only possible through social media. It's like taking a talking selfie for a good cause. Social media remains one of the top communication and influence tools available today. The reach is strong and the influence can be stronger.

It has been refreshing and inspiring to see so many people selflessly giving and engaging with such a worthy cause. Through the chattering of so many teeth, I have been challenged to be more.

Question: What have you found most interesting about the ALS ice bucket challenge?

Want to help Strike Out ALS? Donate at www.alsa.org.