Meet Generation Z. Today’s youngest generation. The first generation who will spend their entire life in a world where earth’s accumulated knowledge can be accessed in an instant with a touch of a finder. They have been described as a “bit edgier” than Millennials. And they’re a generation whose human operating system has been coded by Steve Jobs (watch this for proof). 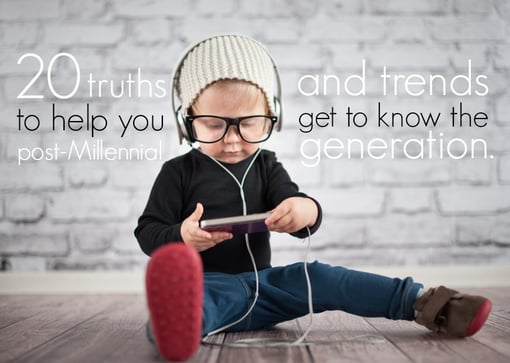 Much like the Millennials, whose sheer size and early tech adoption was a catalyst for many consumer and workplace shifts, Generation Z will have similar disruptive tendencies growing up enabled and empowered by a tech-heavy and digital world.

It’s important to note there is no true consensus on when one generation starts and another ends. Some studies describe Generation Z as those born after 1990 and others after 2000. Either way, the tech and behavioral trends are what’s important to grasp since it won’t be long before Generation Z become our students, consumers, employees, and eventual leaders.

Question: What other traits or trends do you see emerging in Generation Z?