THE EVOLUTION OF MILLENNIALS AND WHAT YOU CAN LEARN FROM IT

Don’t try to lead by correcting but rather by connecting. Too many times leaders want to point fingers and correct when in reality we should be connecting. Building rapport. Depositing into relationships so we can withdrawal when needed. Maturity is the ability to see and act on behalf of others. Immature leaders don’t see things from someone else’s point of view. 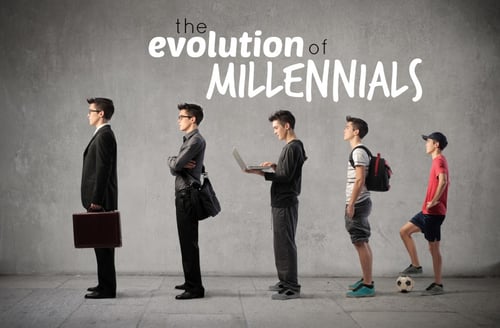 I see many leaders struggling with seeing things from a Millennial perspective. Mainly due to Millennial’s unprecedented digital upbringing do they appear so foreign to leaders. As you’ll see, technology has fundamentally shaped Millennial's friendships, how they learn, perspective of the world, how they allocate time, social network structure, and how they interact with brands and institutions. All of which can be toxic to an organization whose leader is ignorant to it’s origin and impact on the future.

The below is meant to provide leaders with the necessary context around the journey of a typical Millennial. Context that hopefully breeds appreciation and fosters a new connection. Each phase gives a glimpse into how and why the Millennials are who they are.

Remember, blame will only cause you to smuggle your blind-spots, dated procedures, and legacy thinking into your organization’s future. Instead, strive to find ways to leverage Millennial's unique abilities and perspectives moving forward.

The Evolution Of Millennials

1988: One In A Million
A child is born (with earbuds in) and becomes one of 80 million U.S. Millennials. We’ll call him Millennial Mike.

2000: A Digital Native Is Born
At age 12, Millennial Mike first hears about online chat rooms. Mike and his friends deal with the sluggish and bizarre sounds of dial-up modems to create an AOL username to begin chatting with the world. Millennials become the first generation in history for whom digital technology platforms are the essential mediators of social life and information acquisition. They’ve become digital natives.

Observation: Millennials have not had to adapt to technology because it’s all they’ve ever known. The have a knack for adaptability. A valuable trait in today’s flux marketplace.

2001: Privacy Dies
Millennial Mike’s online life shifts from chat rooms to instant messaging (IM) as he uses AOL to message multiple friends. Every life detail and unfiltered thought is shared with friends and as away messages. He asks a girl out online. Then demonstrates how serious he is about the relationship by sharing his IM account passwords. Cliques begin forming online. Offline and private conversations find their way online and shared with the masses. Millennials don’t know better because they are pioneering as kids and teenagers.

Observation: Transparency has been a Millennial practice early on and is now their expectation of brands, employers, and leaders.

2003: Rise Of The Internet
Millennial Mike becomes a high school sophomore and begins leveraging the Internet to do the legwork for major projects. (Wouldn’t you!?) The entire world is now at his fingertips and aggregated by Google. Libraries become ghost towns as online resources such as SparkNotes and Wikipedia become shortcuts for learning material. Mike joins one of the first social networks, MySpace, and the infamous “Tom” becomes his first “friend.” Rumblings of another college-only social network begin to spread.

Observation: Millennials are the first generation that didn’t consider parents or teachers as the authorities but rather the Internet. They treat the Internet as their external brain and approach problems in a whole new way from their elders.

2005: Social Media Embraced
Millennial Mike joins Facebook (which just opened to high school students) and he quickly amasses 1,000s of “friends.” As a senior in high school, Mike leverages Facebook to interact with other incoming college freshman and even finds his future roommate. Mike’s parents give him a cell phone for safety, logistical purposes, and to keep in touch as he heads to college. Tension rise when Millennial Mike discovers texting (T9 style!) and his parents phone bill explodes due to 1,000s of texts sent.

Observation: Millennials are early adopters (ex: social media, cell phones, and texting). Technology has fundamentally defined the Millennials and begins changing behavior and inspiring new values that could not have existed before.

Related Read: The Millennial Mystery Of Texting Vs Calling Revealed

2008: Personal Branding Ignites
Millennial Mike turns to blogging as a high-tech way to share his passions on a public and global platform. Mike also joins Twitter as it gains traction with the adoption of the short character format and as a micro-blogging platform. His tweets, blog posts, and comments begin forming his personal brand and digital stamp. This transparency and contribution also helps Mike grow his network.

Observation: Millennials aren’t passive consumers, they are contributors. The Internet gave them a voice and they want to use it to be heard and to have an impact. Today, 50% of bloggers are Millennials.

Related Read: 5 Reasons To Start Blogging In 2014 And How To Start

2009: Age Of The Network
As a college senior, Millennial Mike sets his sight on getting a job and begins cleaning up his online reputation by deleting his spring break pictures. Mike’s investment into a transparent personal brand has helped him grow his network. Mike begins to leverage his network by crowdsourcing his LinkedIn, Facebook, and Twitter networks not only to find a job but to find out where to eat, what to buy, where to live, what to watch, and what to read. Mike also leverages his networks for important updates, allowing the news to find him.

Observation: Millennials are heavily persuaded by their peers. Constantly turning to their networks for new opportunities, to stay in touch, connect with a brand, and to acquire news.

2014: Passion Pursuers
Millennial Mike feels the turbulence of an ever-changing marketplace and commits to consistently learn new skills and explore new opportunities. He continues to design websites as his side business. The average tenure of his Millennial peers is 2 years, mostly due to lack of career opportunities. Mike figures if his current employer lacks opportunity or engagement, he can always pursue his side business full-time or launch a new business on a Sunday afternoon for $0 at a coffee shop and market to the world for free via his old friend…social media.

Observation: Because the Millennials grew up with the world at their fingertips, they are on an never ending quest to find unique experiences.

Primary Change Catalyst: To be determined...

Related Read: 12 Game-Changing Ways Leaders Can Leverage The Side Hustle

Question: What else does this Millennial timeline teach you about this generation?